It was a-maze-ing! I know that the Knitted Maze was only one of the attractions of Saffron Walden’s weeklong Maze Festival, and as a knitter I might be a bit biased… but I was profoundly moved by the experience of seeing the grand old turf maze swathed in handcrafted fibre. In this case, the turf labyrinth, which is one of 8 surviving historical examples here in England, is called a maze despite the fact that it is actually labyrinth by modern definition… it has a single path leading all the way to the center, with no choices or dead ends. 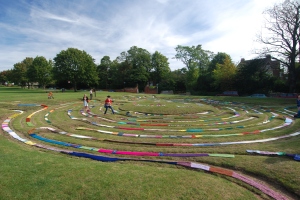 It made for a stunning view, looking on from the raised banks surrounding the labyrinth… long strips of color covering the walls and flanking the paths, each section showcasing someone’s handwork. Walking the paths of the maze brought me in close enough to appreciate each person’s choices and contribution of colour, pattern, and fibre.

Some bits were plain

and some still in progress….

I wanted to wander endlessly, appreciating, enjoying the detail… but then stepping away to view it as a whole brought a new perspective, and I felt like I was looking at a long line of unique characters holding hands to provide a show for the audience. For me, it was a tangible experience of individuality blending into cohesive community. It was quite marvelous to witness the results of  personal creativity weaving into a new and wider tale. Each piece told a story which gave richness and depth to the overall effect. 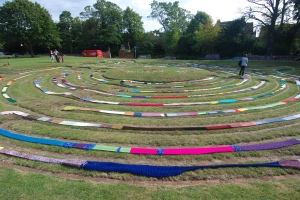 As a knitter, I was pleased with my involvement, and proud of my bit… but to be honest, the most exciting part of my participation was watching my little piece take on a life of its own, down there in the far corner.

And the rest of the weekend… equally wonderful, colorful, and diverse! As always the labyrinth wove its own magic as disparate characters, interests and expressions came together in celebration of an age-old symbol.

Curious about just who might dream up such a zany project? Meet Sophie, the Wonder Woman behind it all…

I'd love to hear from you... Cancel reply

This site uses Akismet to reduce spam. Learn how your comment data is processed.

Where to Find Me