We set out along the Rue St Jacques in the wee hours of the morning, well before Paris woke to the day. Our walk through the dark and deserted streets felt sacred. By dawn we were on the outskirts of the city; we had not wanted to stop even for coffee or a baguette as it would have meant breaking the strangely mystical silence of the morning. By 9:00 we had walked  out of the Porte de Versailles and passed over the Paris Periphique. And the rain had started. Not heavy, just steady. We stopped midmorning to buy little goat cheese pastries which we ate while  huddled under a railway bridge to get out of the rain. Early in the afternoon, we reached a lovely village, Jouy en Josas, where we found a little cafe serving lentils and grilled sausage — surely the most divine food in the world at that moment.

We walked all afternoon, 24 miles in total that day. I was astonished to find myself capable of walking up long

hills with fairly steep grades, in the rain, without pausing. When did I become capable of that? I hadn’t considered that we would really have to deal with inclement weather. A few spots of rain, perhaps, but not steady rain. And yet, it wasn’t a problem, at least not at that point. It was simply a matter of putting one foot in front of the other, over and over again. The rain merely added to the rhythm of the walk.

By afternoon, we were tired and feeling slightly alarmed by the narrowness of the roads we were traversing, jumping onto grassy curbs when vehicles approached, then walking on the hard shoulders until it was time to dodge another stream of cars and trucks. Still we walked on, managing to navigate by the maps posted on signposts outside of the villages we walked through. 24 miles in 14 hours, with only an hour’s break for lunch. Next time we do this, we’ll add an extra day into the itinerary!

Good friends, Giles and Christine Tournier,  met us on the road into Cernay la Ville and took us out to dinner, giving us encouragement as well as sustenance. Giles has made this pilgrimage 13 times, so he knows both the road and its lessons!

This first day of walking showed us a bit of who we are and what we can do. 24 miles is a longway to walk in a day, and a 20 pound pack is a hefty burden, but my body held its own. The wide hips which have brought be such despair over the years showed me that they are good for more than bearing children — my pack rested comfortably on my hips allowing me to carry my own supplies and possessions. My legs were strong and my heart uncomplaining.

We were also enjoying the silence of being together. Not having walked together before, we couldn’t preplan our approach. We quickly found that Lisa’s pace was slightly faster than mine, giving us space for hours of contemplation and silence, even though we were never very far from one another. Close enough for companionship, but too far apart for idle chatter. 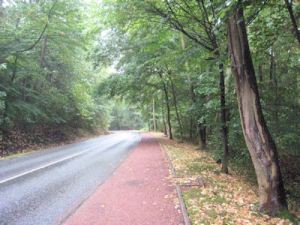 This was our longest day of the walk, the following morning would  see us leaving the canopy of the forest and heading out through the fields…

2 Replies to “First Day of Walking”

I'd love to hear from you... Cancel reply

This site uses Akismet to reduce spam. Learn how your comment data is processed.

Where to Find Me